Since Google ads is a self-serve advertising platform, it’s natural that advertisers will use it with varying degrees of knowledge and skill (or the complete lack of). When advertisers use it without understanding it much, there can be problems. In fact, it can set up a perfect lose-lose-lose situation. The advertiser will lose because their ad does not speak to the needs of the person searching; the person searching loses because the ad doesn’t speak to their needs; And Google loses because there will be no revenue unless someone clicks on the ad. To deal with the problem of poor usage on the part of the advertisers, Google created an effective solution that is now known as “quality score.” 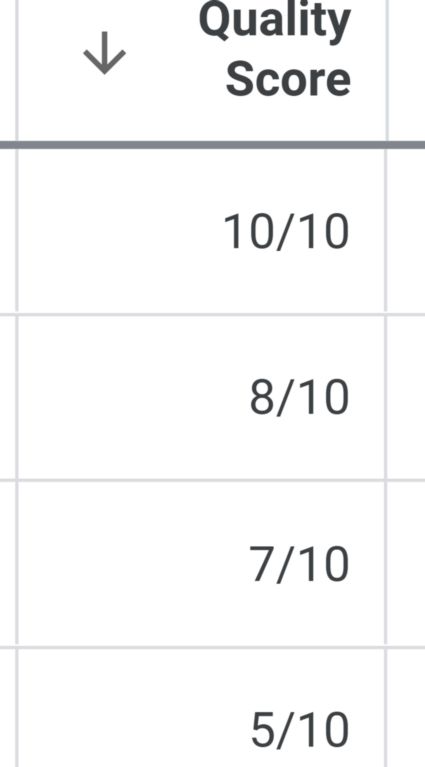 Although quality score results from a variety of usage factors, the most important factor by far is relevance. The system looks for a high degree of relevance between the keyword that’s targeted, the actual advertisement itself, and the landing page that the ad leads to when someone clicks on it. One way that Google judges relevance is by the appearance of the targeted keyword in the ad text. Another way is by observing the CTR (click-through-rate) of an ad that’s been triggered.

Quality score is seen at the keyword level and is measured on a scale between one and 10. Higher numbers are better scores, indicating a higher degree of relevance.

How your ads can be affected by quality score

Quality score affects your advertising efforts in many different ways, including:

Need a proposal or consultation for marketing services? Click Here

The three components of quality score

Quality score takes many different factors into account, but those factors generally fall under three categories. They are:

Expected CTR (click-through rate) – This is Google’s calculation of the rate at which your ad will generate clicks. To perform this calculation, Google analyzes how well your ad has performed in the past.

Ad relevance – This factor analyzes the degree of relevance between your ad and the words the searcher used in their search.

Landing page experience – This component considers the degree of relevance and usefulness of your landing page (the page people see after clicking on your ad). Among many other factors, expect Google to determine if, where, and how relevant keywords are used on the page; the page load time; and if the page contains any prohibited content, such as malware.

Quality score assigns a status of “Above average,” “Average,” or “Below average” for each of the three components. This status is generated by comparison with other advertisers using the exact same keyword over the previous 90-day period.

Subject: Google vs. Meta for Marketing

How to check your quality score

You can check your quality score in Google ads in the keywords panel. You’ll need to customize the columns showing in the table to add the quality score-related data. Here are the basic steps:

How to improve your quality score

What are Google “Discovery” ads?

The Basics of Image Extensions in Google Ads

No More “Google My Business”